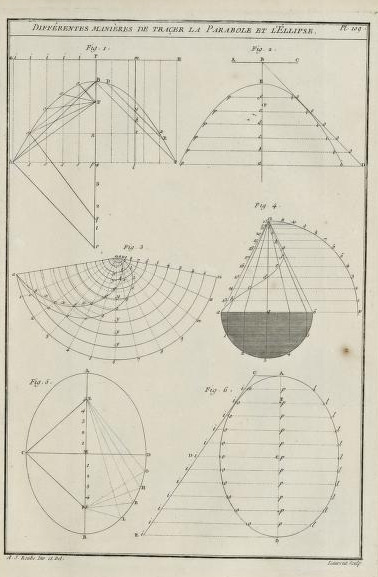 Recently Chris Schwarz lamented that that much of the historic literature on craft is stuffed with geometry but doesn’t explain how to set up a smoothing plane. And to make matters worse the geometry lessons quickly spin out of control with drawings that look like some freakish nightmare.

Back in the day, books were expensive. A modest book in the 18th century could easily cost a weeks wages so a treatise on things like milking a cow or setting up a smoothing plane, or constructing window sash never entered anyone’s thought. In a village of a hundred souls, ninety-nine knew how to milk a cow and half of them could set up a plane in their sleep. Yet no one in the village, possibly no one in the county might know (let alone share), the knowledge that lies behind the smoothing plane, window sash, or that magnificent cathedral up on the hill. That my friends is geometry. But hear me out. It’s not as devilish as it sounds. This artisan geometry of the trades doesn’t involve memorizing a boatload of theorems and formulas that make you want to light up a cigarette and knock down a shot. Well you might want to do that for the pleasure of it, but not because the geometry drove you there.

I admit when I first explored what the old writers had to say, I complicated it by my own ignorance. I often passed over the simple stepping stones of knowledge and then skinned my shins. Here’s an interesting bit on this path of artisan geometry best illustrated by Plate one, figure one from Roubo’s monumental collection of engraved drawings.

Plate one, figure one starts with a point. Roubo isn’t alone in beginning at this humble starting place. Many similar examples could be cited, often there is a break in forty pages of medieval Spanish text with a single          .           followed by another twenty pages of narrative. Point being you can learn to visualize and build some really marvelous things if you begin at the right beginning. And that beginning is the humble point.

Jim Tolpin and I are at it again, writing a workbook that takes that historic knowledge and walks you through it step by step. Who knows? Maybe there’s some window sash, elegant chairs, or even a grand cathedral inside your head just waiting to be made if you knew what they knew.

Woodworker and writer
View all posts by walkerg →
This entry was posted in Design Basics, Design Book. Bookmark the permalink.